There is no mental health or drug addiction crisis; rather it’s just a crisis of unresolved and unacknowledged pain that our economic system exploits and profits from.

We often hear in the media about the crisis in mental health and addiction. In the US now there are constant reports about the “opioid epidemic”, and understandably so. The most recent figures from the Centre for Disease Control and Prevention show that 64,070 people died from drug overdoses in 2016. This was a 21% increase from the year before, and they predict the figure for 2017 will be even higher. That’s just those who died, let alone the 2.1 million struggling with ongoing chronic opioid addiction. We then hear about the crisis in mental health, where depression and anxiety have increased so much so that a recent study has shown how one in six (16%) of the population have taken some form of prescription medication for their mental problems over the course of the year. Adding to that, alcohol addiction continues to increase at the staggering rate of 49% since 2000. This translates into one in eight American adults, or 12.7% percent of the U.S. population, now meeting the diagnostic criteria for alcohol use disorder, according to the study. Although not to the severity of the US, the upward trends are also occurring in both Europe and Australia. You add illicit drug use, pornography addiction, and the other myriad numbing options we have available, and we see industries making billions of dollars, not in the healing of pain but its ultimate suppression. Then, in a weird twist of irony, these very means of supressing pain enable us to keep functioning the cogs of the machine that enforces and amplifies the very pain needing to be supressed!! But more on that later.

So why so much pain? 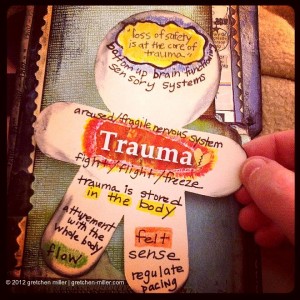 Studies over the past thirty years have revealed a large portion of that pain can be traced back to unresolved childhood trauma. The ACE (adverse childhood experiences) study conducted by the CDC in the US (which I have covered in more depth here in a previous article) revealed the staggering statistic that during childhood, 28% of the study had experienced physical abuse and 21%  had suffered some form of sexual abuse. Versions of this study have been repeated and have yielded the same conclusions. This particular CDC study looked at people who were white, college educated and middle class, so this is a sample from what “normal” supposedly looks like. As you move toward poorer and more marginalised sections of the population, the rates of trauma increased even further. Childhood abuse and other emotionally damaging experiences are so prevalent today that trauma-focused psychiatrist Bessel van der Kolk claimed they are the single most important health problem facing the US.

The profitable elephant in the room

This isn’t to say every discernible problem regarding mental health and addiction stems from unresolved childhood trauma, but there is no doubt that much does. It’s a fundamental starting point in addressing a long-term solution regarding how we, as a society, tackle the growing problems of addiction and mental health.  However, in the media and mainstream discourse we talk, discuss and argue about everything but this simple basic fact. I think that one reason for this is that the source of trauma arises from the sanctity of the modern family unit. This isn’t “stranger danger” or “catch a predator” type villains, rather it’s our parents, grandparents and immediate family members that are most often the perpetrators of such anguish and abuse. Recognising the intimate proximity to our supposed normality is just too confronting for most people to handle. Secondly, there is a problem in how we address issues of peoples’ wellbeing through the lens of an individual’s pathology, rather than the social, familial and cultural systems those issues arise from. Treating problems with sellable substances, on a person-to-person basis, is an easier solution than addressing the very nature of societal structures themselves. Lastly, when reading these statistics in a health context, it’s easy to become detached from how they all represent increases in business profits. The fact that “every problem has a product to be purchased to provide the solution” is a big part of the very problem itself. The neoliberal dogma of “markets can solve every problem” fails when we see so much that this ideology is part of the very problem itself.

We don’t heal what we never feel.

So the end result is that we have millions of traumatised children maturing into adulthood with the expectation of ending up a somehow-functioning member of society. Yet the question not often asked is, what kind of society do they enter?  What does the experience of living in this world offer in terms of acknowledgement, healing and care? The answer, in fact, is worse than nothing. Rather they are actively encouraged to deny and supress whatever is needed to heal.   Markets provide immediate yet superficial relief from pain, an emotional pain that the teenagers entering adulthood are often not even aware they have. From food, drugs, drink, sex and electronic devices, children are directed early on to know and seek out anything and everything that gives them respite from their unrecognized pain.

The nature of our capitalist worshiping society forcefully thrusts us all into various roles: the role of workers, the gender roles of men and women, and the most critical role of all — “rabid consumer”. These roles further disconnect people from their interior world and disenfranchises them from their sense of agency and autonomy. The majority of wage earners loathe their work and endure because of survival, not out of genuine choice. In addition, the money we earn to subsist allows us access to the products that enable them to further supress our pain. For many, “keeping it all under” seems essential to be able to be a functioning member of society. As Laura K. Kerr, author of the book “Dissociation in Late Modern America: A Defense Against Soul?” mentions in her blog:

Daniel Lord Smail makes a connection between global capitalism, social hierarchies, and the body’s reaction to threats. Smail argues capitalism exploits the body’s survival responses (i.e., freeze, fight, flight, and submission) by creating the conditions of psychological domination as well as providing relief from the feelings of powerlessness that capitalism and social hierarchies engender. According to Smail, capitalism generates stress through its unpredictability and hierarchical power structures, but it also alleviates stress by producing an economy organized around the production and circulation of addictive substances and practices.

We all yearn to belong, with connection, serenity and meaningfulness at the centre of our lives. Yet the reality is the prevalence of unresolved childhood trauma is not only unacknowledged but sadly exploited by the economic system its survivors live within.  We are essentially caught in a vicious circle: in order for large sections of society to function they need to supress their pain, as our economy is built on function and nothing more. There is no room or encouragement for people to be how they truly feel, rather the wheels just keep turning and economic necessity doesn’t allow the luxury of genuine self-reflection. In addition to profits gained by keeping people numb, it also ensures that they never feel the appropriate anger and outrage in response to how utterly screwed over they are by a system that is built at the cost of the many for the benefit of the few.

The problem can’t be the solution

Human problems can’t be solved by inhumane systems, and the reality is that the way we work, interact and consume with all its alienation, disconnection and distraction takes us away from our humanness. Sadly, this move to feel less or feel nothing doesn’t come from conscious choice, rather unconscious necessity. As Erich Fromm so aptly puts it:

“A person who has not been completely alienated, who has remained sensitive and able to feel, who has not lost the sense of dignity, who is not yet “for sale”, who can still suffer over the suffering of others, who has not acquired fully the having mode of existence – briefly, a person who has remained a person and not become a thing – cannot help feeling lonely, powerless, isolated in present-day society. He cannot help doubting himself and his own convictions, if not his sanity. He cannot help suffering, even though he can experience moments of joy and clarity that are absent in the life of his “normal” contemporaries. Not rarely will he suffer from neurosis that results from the situation of a sane man living in an insane society, rather than that of the more conventional neurosis of a sick man trying to adapt himself to a sick society. In the process of going further in his analysis, i.e. of growing to greater independence and productivity, his neurotic symptoms will cure themselves.”

Facing what’s there for ourselves and others

The solution requires first that we are honest about the extent of the childhood trauma so many people carry within them that is most often unrecognized and denied.  Secondly, as individuals, we need to go through our own process of facing our pain, whatever its origin, and doing so requires we put down our beer, turn off the TV or tablet, and be quiet enough for long enough to let what’s there rise to the surface and be seen and heard. As we become more skilled and honest about our own interior wounds, gifts and humanness, it puts us in a better position to help and support these who have yet to get there. We are all in this together, my pain is yours and yours is mine, mi casa es tu casa. It’s just an inescapable reality and the sooner we embrace and accept it the sooner we can do the healing required to move forward as one whole humanity.