Arms manufacturer Lockheed Martin: What they say and what they really mean.

Arms manufacturer Lockheed Martin: What they say and what they really mean.

If there is an industry that is most morally repugnant, corrupt and sociopathic, it is the defence industry. Even its name is a lie. Trillions are spent on providing our chicken-hawk politicians the means to destroy and murder. It’s one of the only industries whose profits soar in line with the suffering of millions. What is interesting in the promotional material is that you’re at a loss to find words like “death,” “killing,” or even “people.” Instead, they use technical jargon to cloak the brutal reality of what their weapons do. What they describe as a “moving target” can end up being a fleeing ambulance full of children in reality, so for a “what they say and what they mean” feature it’s truly easy pickings, but it’s hard to read their words and not be left with an extremely bad taste in your mouth.

Far removed and a long way from the end result of what they make.

WHAT THEY SAY : “Lockheed Martin has a long history of successfully providing its customers with missile and missile systems that are affordable, proven, and in production.”

WHAT THEY MEAN: Lockheed Martin has a long history of successfully providing governments, despots or anyone able to pay with missiles and missile systems that are affordable and proven to kill children, parents, grandparents and pets, as well as destroy critical infrastructure. We have a big warehouse of these bad boys so you can order as many as you want.

Marillyn. A. Hewson, CEO of Lockheed Martin selling her wares.Blowing stuff up and killing people is big business.

WHAT THEY SAY: “Our reputation is backed by a record of exceptional contractual performance and successful partnerships, in both the U.S. and international defense communities.”

WHAT THEY MEAN: Our reputation is backed by a record of exceptional partnerships, helping governments around the world blow up stuff and kill countless soldiers and citizens. Also, the amount of fraud we conduct is not as bad as some of the other guys.

WHAT THEY SAY: “Lockheed Martin is supporting the warfighter by providing a wide variety of highly effective and reliable weapons systems to ensure that the right weapon is available for each situation that they may face.”

WHAT THEY MEAN: Lockheed Martin is supporting the murderous villains by providing a wide variety of highly effective stuff that destroys things and kills people. These reliable weapons systems ensure that the right amount of people are eviscerated for each situation they may face.

WHAT THEY SAY: “These weapon systems include precision strike weapons with long standoff ranges to keep pilots and aircraft out of harm’s way. Lockheed Martin systems also include smart submunitions to give the warfighter maximum flexibility as well as fire support mobile artillery and guided munitions to dominate the battlefield.”

WHAT THEY MEAN: These weapon systems include really accurate bombs that you can shoot from miles away, which means the pilots don’t have to see all the people they just slaughtered. Lockheed Martin systems also have other stuff that, on the ground or in the air, will ensure you only leave death and destruction in your wake. This gives the aggressor lots of flexibility in how he chooses to kill and obliterate; let’s not forget variety is the spice of life.

WHAT THEY MEAN: You should come over and check out all the rad shit we have. I am not kidding, we have about 101 different ways to blow shit up and wipe people off the face of the earth. Hell just called, and they want their weapons back. Hey, just kidding. We even have stuff that keeps you snug and cosy when you are unleashing your torrent of annihilation on those who are not doing as instructed.

WHAT THEY SAY: “Lockheed Martin-developed strategic missile systems include intercontinental-range ballistic missiles and reentry systems that serve as strategic deterrents.”

WHAT THEY MEAN : Our shit is so hardcore that when people see the serious carnage you can impose at the flick of a switch, they will think first before they fuck with you.

WHAT THEY SAY: “The Lockheed Martin Dual Mode Plus leverages the enhanced performance of the PavewayTM II Plus laser guided bomb (LGB) to provide the lowest cost, all-weather direct attack capability available today.”

WHAT THEY MEAN: Okay, it sounds like a new Gillette razor, but check out our PavewayTM II Plus. This baby can pretty much blow stuff up any time of the day. Before brunch? After lunch? Late night supper? You choose. 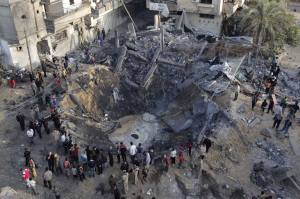 WHAT THEY MEAN: Built like the Sat-Nav in your car, but instead of punching in the town you want to drive to, you just punch in the town you want to blow up, then sit back and relax as Paveway Plus does the rest. In addition, we have added a bonus feature free of charge. If even that wedding party tries to run for cover, Paveway Plus will follow them. There literally is no escape.

WHT THEY SAY: “Dual Mode Plus provides greater mission flexibility through a launch acceptable region larger than other dual mode weapons, increased standoff and cross-range capability. Warfighters will be able to maximize operational effectiveness through use of single weapons loadout rather than a combined loadout of Paveway II LGB and JDAM munitions.”

WHAT THEY MEAN: Instead having to use loads of different types of bombs, PavewayTM II Plus is the shampoo-and-conditioner-in-one of bombs. With just this alone you can flatten and burn to ashes much much more stuff. Why press three buttons when you can just press one? 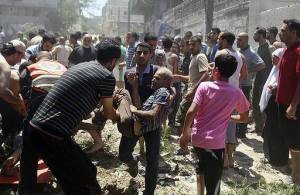 Who they are: At Lockheed Martin we are proud to be the world’s leading arms manufacturer. This means we help facilitate the pointless and violent death of millions of humans. We provide the means to plunge innocent lives into a pit of desperation and despair, as we help murder their family and destroy the critical infrastructure required to live a healthy life. We make billions on death and destruction, and we are proud of it. We have accumulated untold wealth and power on the back of the world’s grief, suffering and despair. Some people say, “Well, if we didn’t make weapons someone else would,” but at Lockheed we don’t need to justify our wanton passion for slaughter and devastation. Yes, someone else may do it if we didn’t, but never as good as we do it. Lockheed Martin: where every day we make a killing.