Fascism through finance or Citizen-Driven Democracy? Why we should all be watching what happens in Greece

Fascism through finance or Citizen-Driven Democracy? Why we should all be watching what happens in Greece 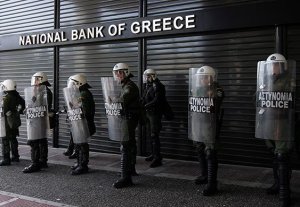 I think we all should be paying very close attention to how things unfold in Greece, as the outcome is a litmus test for democracy and will ascertain whether financial institutions have already become our new “by proxy” governments. Greece’s prime minister, Alex Tsipras, explains in detail what is actually at stake:

“The first strategy aims to deepen European unification in the context of equality and solidarity between its people and citizens.

The proponents of this strategy begin with the assumption that it is not possible to demand that the new Greek government follows the course of the previous one – which, we must not forget, failed miserably. This assumption is the starting point, because otherwise, elections would need to be abolished in those countries that are in a Program. Namely, we would have to accept that the institutions should appoint the Ministers and Prime Ministers, and that citizens should be deprived of the right to vote until the completion of the Program.

In other words, this means the complete abolition of democracy in Europe, the end of every pretext of democracy, and the beginning of disintegration and of an unacceptable division of United Europe.

This means the beginning of the creation of a technocratic monstrosity that will lead to a Europe entirely alien to its founding principles.”

What he is saying is that if the banking system, through blackmail and control, can force a sovereign state to relinquish the mandate that’s been voted in, then we may as well forget elections, forget democracy and just hand the reigns over to the Troika, as democracy within this framework is a farce. 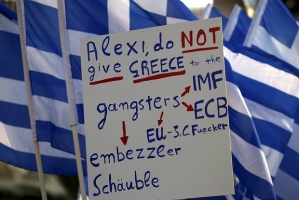 What we see in Greece is what happens when any country dares to step outside the agreed upon terms of the global graft that banking is in on. The finance industry has become one of the most egregious, brazen and sophisticated organised crime syndicates the world has ever seen. Under names like IMF, World Bank, and Federal Reserve, it’s easy to forget these are not impersonal neutral bureaucracies, but rather representatives of the interests of the private banking sector, set up to enforce hardship and squeeze money from whoever they can. The fact of how our political system gives these criminals legitimacy only points to how bought and corrupt our political system is.

In case after case, third-world countries have been lent money, only for it to be siphoned off by corrupt despots (that the West has ensured stay in power) who have left the country with nothing to show for the debt, footing the bill for such indiscriminate lending. Mohammed Suharto, Ferdinand Marcos and Mobutu Sese Seko ripped off up to $50bn (£28bn) from their people. Despite it having been stolen, the people of Indonesia, The Philippines and Congo still had to pay these debts back. 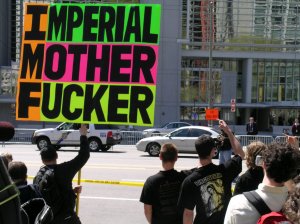 Massive chunks of a country’s GDP can be put aside, just to make interest on loans that no citizen approved, but ends up lumbered with the responsibility to pay back. All this keeps poor countries poor and exports any of the small wealth they create into the coffers of these greedy and heartless banks. Banks play their vital role in keeping the third world open for business and “resource extraction friendly” by ensuring crippling and inescapable debt peonage. With examples like this, you can see why usury, at one stage of human history, was illegal.

After witnessing this for decades throughout the third world, these same forces have now set their sights on Europe, aiming to play the same con with the same profitable outcomes. So far it seems to be working, as one aspect of this long con has been called “bailing out the banks.”

No other industry could screw up in such a monumental way and have such a destructive impact on the whole globe, and then expect the victims to foot the bill by paying the orchestrator of the crisis themselves. It’s like a hospital getting blown up and the patients then being forced to pay those who shot the missiles for rebuilding the hospital, of course also with a healthy commission on top. It is genuinely that absurd. The masters of the universe who created this are still holding key political and industry positions of power and prestige. No one has gone to jail, and the only price that had to be paid has been born by the victims themselves. No joke!! 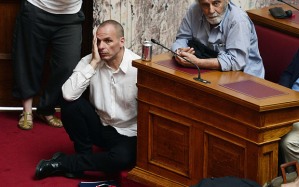 So as the banking Mafia puts the squeeze on Greece, it will be very interesting to see what happens, as what they worry about most isn’t Greece itself, but the message it sends out to all other debtors. All Mafia bosses need to set examples, as they know if word gets out they are weak, then the whole organisation could come crashing down. With a gun to its head, Greece might risk saying “go on… pull the trigger” on the gamble that it had been shooting blanks the whole time. So we will just have to wait and see.

2 thoughts on “Fascism through finance or Citizen-Driven Democracy? Why we should all be watching what happens in Greece”