Once again, we’ve witnessed another horrifying tragedy in Paris. At least 128 lives were stolen, with another 180 reported injured, in what must have been a harrowing and terrifying experience for those involved, and is now a sad and painful time of mourning for their families. Unfortunately, if we are able to see past the mainstream media’s relentless convolution of facts, we don’t have to ask why this happened. We know why, and it isn’t an epic struggle of liberal democracies against extremist Islam. Rather, it the battle of state-sanctioned sociopathic violence versus radical groups such ISIL and al-Qaida and their particular brand of sociopathic violence. We are simply viewing different sides of the same fucked up coin. As always, the tragic casualties of the power struggle are innocent civilians, both in Europe and the Middle East.

The murdered and injured in Paris, to us in the West, seem like a large toll, yet this points to how insulated we are from our own tax-paid violence in lands abroad and the growing violence of many of the regimes we support both ideologically and financially. I know I’ve laboured this point in several previous articles, but it’s worth being reminded of again and again: The West’s illegal occupation of Iraq and Afghanistan has come at a cost of the lives of over 1.3 million, mostly civilians.  Prior to the sanctions and wars on Iraq, it was a relatively stable secular state. It was under the control of a tyrannical dictator, but so is every other Middle Eastern country, so that wasn’t anything special. We and our allies invaded this sovereign nation and decimated it completely. There were times when 135 people dying was a consistent daily figure, not just occasionally, but for months and years on end. We encouraged religious tension when there was previously none. We basically invited jihads from far and wide to further the divide, all for the purpose of opening Iraq to US investment, in particular the oil business. It was a foreboding fact that the only Iraqis protected in the initial invasion belonged to the Ministry of Oil and the Ministry of Interior (the secret police). We laid claims to our spoils without batting an eye.

Prior to that, our inhumane and pointless sanctions on Iraq cost the lives 500,000 children as the price Madeline Albright, the US Secretary of State, said was worth paying. That’s 500,000 Iraqi children, but certainly not 500,000 American children.

Then we have the hundreds of thousands who have been murdered by regimes we openly supported and even brazenly prompted with military aid, from Latin America in the 1960s up until the1980s, Asia, Africa, Eastern Europe and the Middle East, places filled with sordid histories of torture and murder to ensure Western investment opportunities were never thwarted. Yet, in our first-world standard of living, funded by the poverty and oppression of the third world, we are sequestered from how bad it is for so many, and we don’t just support blatant concealment of facts, but we allow our governments to ensure we’re kept in a blind spot. We live in a cloistered bubble, being drip-fed information through the filters of BBC and CNN that creates convenient, simplistic and palpable narratives of how we in the West are supporting the creation of emerging democracies, when nothing could be further from the truth. Just look at what happened in Gaza, Venezuela and Egypt when the people democratically voted for the wrong (by Western standards) governments. Look at what kind of support we provided for those democracies.

Of course, Western leadership will pounce on the opportunity to increase spending on this ubiquitous “war on terror,” and extend more unquestioned power to the executive branch. It will be used as an excuse to discard any responsibility for the refugee crisis, and to close the borders. It’s like lighting a house on fire, and then locking the doors, in case anyone with a matchbox gets through. One disgusting and alarming attack on the City of Light, one Syrian passport reportedly found at the scene, and the Western world loses their minds condemning every refugee as a terrorist, despite the undisputable fact of millions of Syrian refugees fleeing from the very terrorists we are supposedly fighting, or fleeing from the tyrannical destruction of Assad, who is also supposedly fighting the same terrorists we are fighting. I guess our enemy’s enemy is no longer our friend. 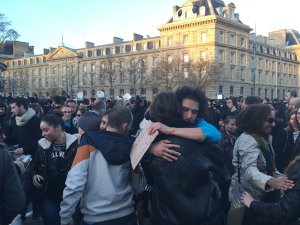 Clearly, we do need to join in solidarity against the wicked forces that benefit from these hideous acts, as we all know these types of tragic events only further rationalise and justify our own brand of terrorism. Yet when 450 civilians, 100 being children, are killed by our air strikes in Syria during a campaign against ISIS in the last year, or our drone strikes murder 1200 plus civilians in Yemen and Pakistan, there is no mourning. This violence is diluted in the Orwellian lexicon of the 24-hour news. Our own terror campaigns, wherein we kill innocent civilians, are renamed “surgical strikes against militant strongholds with some collateral damage.” For their deaths, there is no gnashing of teeth and questioning why. They are nameless non-people with no hashtag, no Facebook colours of solidarity, no state funerals and memorials built in their honour, and no solemn speeches made by our leaders denouncing their tragic deaths. How could there be, when they are the ones ordering it?

Yet their deaths are just as heartbreaking, and their loved ones will weep no less while left with the same understanding of the senseless absurdity of it all, just like the families of the victims in Paris. Even worse, we are complicit in allowing our governments to go unquestioned and unaccountable for their crimes, because whatever heinous acts ISIS commits, they are not carried out in our name, with our tax dollars and with our votes. We are not responsible for the terror inflicted by ISIS, but we are most certainly responsible for the terror too many of the world’s people feel toward the West. For once, maybe we should come together and denounce terrorism in all its ugly forms.

One thought on “We #PrayForParis, but #CheerForBombs dropped on Syrian children.”