The real scroungers and panhandlers Nigel Farage forgot to mention in the UK election debate. 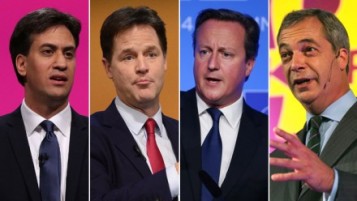 Yesterday, the UK got to witness the 7 leaders of the various main and smaller political parties have their first debate (with the noticeable and disappointing absence of George Galloway). It was slightly refreshing to hear something other than the Lib-Lab-Con homogenised policy drone we are normally exposed to, as we got to hear the Greens and SNP getting some decent comments in. Yet, honestly, the acting required to sprout the bullshit that comes from the mouths of Cameron, Clegg, and Miliband in particular is outstanding and almost surreal to watch. Their lines and comments seemed so rehearsed and polished, even fine-tuned to appear authentic, making them oddly so unauthentic that I couldn’t help thinking of that Frankie Boyle joke that if Ed Miliband can’t even get his face to do what it’s told, how can he lead a nation? 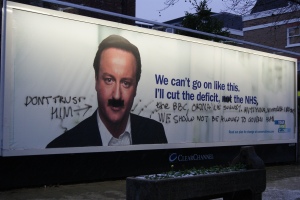 No truer words written in graffiti.

Like all debates, you listen in, wishing you could add your own rebuttal, which one lady courageously did. She pointed out the farce of “supporting the troops” with the amount of homeless veterans sleeping rough (supporting the troops was something Cameron had to make sure he got in. “Remember,” says his media aid, “mention the troops, but try not to mention the 1.3 million murdered by those troops.”). Cameron responds in true “Teflon Tony” style by agreeing, but then by saying this is why we should give to charities that help said homeless veterans, all without blinking an eye. I thought it was the government’s job to care for veterans, not charity’s? This comment alone reveals where Britain’s former welfare state is going.

Yet the comment I could not help feeling riled by was Nigel Farage’s about those skiving immigrants coming into Britain and getting free NHS treatment for their AIDS.

Putting aside the scaremongering and xenophobic nature of not just fuelling fears on the dangers of immigrant but “Mooching AIDS infected immigrants” what the other candidates failed to point out (and what was most shameful about this comment) was where these supposed skiving health care scroungers sit on the totem pole of those that leech off the government and the taxpayers’ tit. Maybe there are some holes to plug up in how benefits or healthcare services are accessed by foreign nationals, but even if there is, it’s way, way down on the list of what people should be outraged by. Here is a list of some VIP top-tier scroungers I think it would be better to get riled up over:

Why wasn’t that potential hundreds of billions of pounds in savings on Nigel Farage’s list of free-loaders we need to crack down on? Oh, I wonder. What his omission reveals is the disingenuous nature of the UKIP being a party for real Britain. They are just a new faction of the Tory party, plain and simple.