“Straight Outta Compton,” but to where? How corporate America co-opts, dilutes and profits from once-angry voices.

“Straight Outta Compton,” but to where? How corporate America co-opts, dilutes and profits from once-angry voices.

You might be wondering how it is possible that I can review a film having only seen the trailer? Well, with my psychic powers combined with the predicable formulaic nature of how films are made, it’s a lot easier than you might think. You remember the abridged notes that saved you from reading all of “Wuthering Heights” at high school? Well, trailers are much like those, just with the last page missing.

So in this week’s installation of “Masters of the obvious: 101 reasons the music industry and Hollywood are cultural turd factories” (installations one and two here and here), we have “Straight Outta Compton,” the movie chronicling the origin of the gritty rap legends NWA. Here is the movie synopsis from wiki:

“In the mid-1980s, the streets of Compton, California, were some of the most dangerous in the country. When five young men translated their experiences growing up into brutally honest music that rebelled against abusive authority, they gave an explosive voice to a silenced generation. Following the meteoric rise and fall of N.W.A, Straight Outta Compton tells the astonishing story of how these youngsters revolutionized music and pop culture forever the moment they told the world the truth about life in the hood and ignited a cultural war.”[5]

Wow, I am getting a hip hop hard-on already. Sounds compelling when we hear the terms….

A modest list, I know. The trailer gives us a visual and audio breakdown of this story’s narrative above. We see them starting off from humble beginnings. We witness their trajectory to stardom ascending whilst being punctuated by police brutality, and get a clear message of how awesome they are. Also, we see what appears to be the LA riots, that the trailer at least seems to imply they somehow where a part of, contributed to or was the sole reason it all kicked off. Here I was thinking it was police brutality, Reganomics, racism and dire poverty that lit their fire. Of course, being part of the production team and being the green light behind the project, we see their elevation to rap gods through “their eyes,” which makes it easy to conclude this be a movie version of rap genre “look how bad-ass and rich I got, but hey, still keep’n it real.” Yet, it’s not the authenticity of this story of how these five young men made music and how they revolutionised rap; rather it’s what happened afterward that I find interesting, as the “post story” to this “pre-story” of rebellion tells a cynical tale of how the energy of rebellion can be bought, sold, twisted and repackaged to enrich the very forces it supposedly riles against. 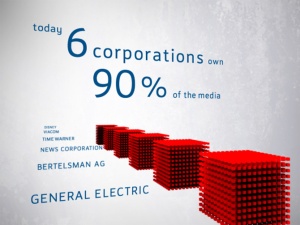 What this movie represents is how corporate America and its best storyteller “Hollywood” can take youthful rebellion and the challenging of abusive authority and make millions from it. Both this movie and the rap music that inspired it are ironic examples of that very fact. New Line Productions, who are releasing the film, is a subsidiary of Warner Brothers, which is a subsidiary of Time Warmer. Time Warner is one of the 6 mega-companies left standing that own the media business. Along with a few others, they now control 90% of all media in the US and much of the world. They dominant and determine all the narratives and storytelling our culture is exposed to. This “fuck authority” anthem that comes through the movie is bankrolled by what it’s meant to be fucking. Whatever raw and noble intention the original founders of NWA had, their feeling and experience has been culturally franchised and sold on.

I can’t wait to see the sequel already: “Straight Outta Compton 2: Beverly Hills and Them Bitches.” The two most successful members of the NWA crew, Ice Cube and Dr. Dre, now have a net worth of millions. Dr. Dre’s net worth is $160 million, while Ice Cube’s is $140 million. Still, whatever money they have made, the record companies and movie company have made far more. Corporate America worked out a long time ago there was money to be made in the “urban market,” and to do this, successful artists like Dre and Ice Cube have had to be brought into the fold and rewarded for selling their experience and struggle, like how the Guardian media group courts “progressives” by selling itself as a news organisation that “challenges the status quo.” It then takes that demographic and makes millions selling on those eyeballs to advertisers, which enriches that very status quo. So to do artists like Ice cube and Dr. Dre, not that making buckets of money is inherently wrong, but don’t do all “fight the power” in one breath, and then “transfer that money into the my Caymans account” in the next. 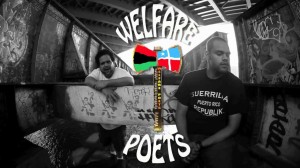 If you want to know what their careers may have looked like if they didn’t allow their music to be mass monetised, just look at hip hop artists like Immortal Technique, Welfare Poets, Los Chikos del Maiz,  Keny Arkana and others like them. Maybe you have never heard of them, and there is a good reason why: their anti-establishment message and music is not in line with making record sales, dumbing people down, and remaining a “play-doh threat” to established power. Whatever culture war NWA  claim to have started, their team has lost, and thanks to no help from them. Instead of taking that fiery “fuck you” and building on it, the music that “changed the rap game” just morphed into dick swinging, uber-masculine ego brags that extolled the anti-virtues of money, bitches and fame. Maybe if they all died in a freak air balloon accident, a film like this could have ended with a question of “what if?” What if they had lived? Could their music have sparked a revolution? Changed society? Well, they did live, and no, they didn’t change shit at all, except their bank accounts.

If you want some acid test that a movie, hip hop group, organisation or political party is a threat to established power, you can be guaranteed that established power won’t bankroll, promote and be remunerated by anything that’s a threat to it. Look for movements (occupy and labour rights), people (Julian Assange/Edward Snowden/Whistle-blowers), or even nations (Granada, Venezuela, Cuba, Scottish independence) and you see they that they are crushed, leaned on, silenced, murdered or mocked. That being, the litmus test “Straight Outta Compton” will utterly fail, not because the movie will be bad or even dishonest, but rather because we know once “Outta Compton,” the money started and the fight ended.

In this piss take of Black Eyed Peas, Kroll’s show does a great parody of this transition from supposed “voice of dissent” to corporate shills, to kids’ entertainers, all in under 3 minutes. Silly, but funny.