The whole question in the US presidential race regarding the “threat” of ISIS is a joke. The term “threat” and “ally” are interchangeable, on the basis of which regimes support US economic interests and which don’t. Saudi Arabia is the most militarily powerful, tyrannical, barbaric, religiously fundamentalist, as well as one of the biggest funders of terrorism in the region and they are an “ally”. Go figure. The question that should be asked of Hilary Clinton and Donald Trump is “What are you going to do about ISIS or Syria’s non-compliance in the region?” At least that would be honest.

Yet the mainstream media’s slavish and unquestioned running with this narrative isn’t by chance. They are an essential cog in the propaganda apparatus that ensures debate remains within the acceptable and moronic parameters they set. Just think of the Soviet Union’s state propaganda newspaper, Prada, but add reality TV, wall to wall with inane advertisements to compel you to buy things you don’t need for problem you don’t have, all with live twitter feeds read out by Wolf Blitzer and we that will give you an accurate snap-shot of the type of media that now surrounds us.

On September 7th, part-time drag queen and respectable journalist, Matt Lauer, hosted the NBC’s muscularly titled “Commander-in-Chief Forum” where he separately interviewed the presidential candidates (well the two we told the US public to choose from). Of course, being all about the “ Commander-in-Chief” angle, the question of ISIS and the Middle East and how each would deal with them came up. Now putting aside the arrogant assumption that they have right to “do something”, the whole framing of the question misleads and deceives those watching to what is really is being asked.

Questions along the lines of “What will you do about the threat of ISIS?” should be more accurately asked as,

“As supreme commander of the Empire, what will you do to squash these pesky outbreaks of rebellion, which unsettle our full spectrum dominance in the region?”

Cue the background music from Star Wars where Darth Vader arrives to discuss the Death Star. Yet seeing the US “not as the good guys” is a very hard idea for many to grasp, as it goes against grain of the cherished narrative forced down our throats that “we may make mistakes but we have good intentions.” Of course, ISIS aren’t the good guys either; they just another alliance or enemy within the global mafia of state and corporate power that runs the world.

What makes the facade of the “threat of ISIS” is more than just the fact they are as a big a “threat” militarily and economical as Malta or Iceland to US sovereignty or national security. Rather it’s the fact there are genuine threats that citizens of the US and other Western nations should be concerned about, such as…

Just to name a few. These are real and visible threats to people’s well-being, freedom and happiness. I am not even looking at the broader issues of the billions living in abject poverty around the world; these are the issues that impact people living here in the west. The fact we have the privilege and luxury that many don’t bestows upon us a responsibility to fight and stand up for what’s right and what’s true. 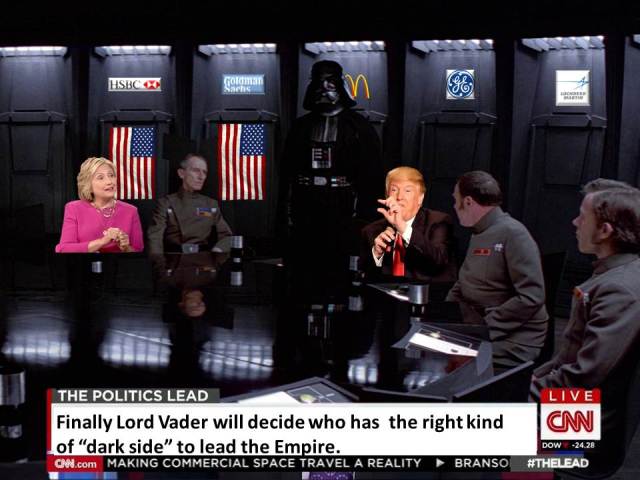 The pantomime and “theatre of the absurd”, which is exactly what the US elections are, show us we can’t rely or depend on changes within the system; we have to create something different from the ground up. Something based on our shared humanity and guided by a moral compass. Something outside the current cynical and political dystopia that replaces ignorance, violence and dominance, with self-awareness, compassion and a basic understanding that we are all connected and all have a vested interest in looking after each and the earth we share.

How we do this and whether we can pull humanity back from the brink, I really don’t know. I have hope it’s possible and  I at least want share by amplifying the millions of voice that feel the same way. I want to tell my kids, with conviction and self-belief, that a better, more loving and just world is possible. Yet I can’t expect them to see this is true, unless I can embody that myself and have faith in its possibility. That painfully starts and runs parallel with addressing, owning and becoming more conscious of my own greed, egotism and dysfunctionality. I have my own “dark side” that I have to heal. As history shows us, any social change that isn’t accompanied by some shift in consciousness will inevitably end up staying the same. Yet we have to start somewhere. The fact is, caring and kind people exist and we are the silent majority. Despite everything, we haven’t allowed the corrupted and poisonous system we live in to make our hearts cynical and minds numb. You could argue that that alone is its own living miracle. As the Vasily Grossmen quote I have on my homepage states,

“Human history is not the battle of good struggling to overcome evil. It is a battle fought by a great evil struggling to crush a small kernel of human kindness. But if what is human in human beings has not been destroyed even now, then evil will never conquer”

So what seems unimaginable can be imagined, what seems out of reach is within our grasp and where a miracle seems required, we just may have it in us to make that happen.