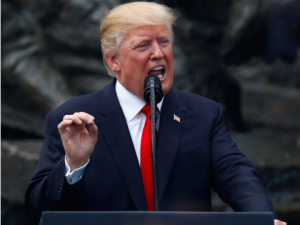 Before Trump embarked on the G20 summit he gave a speech in Poland where he appears to layout his view of the world and the key concerns and problems we face. Although it’s been panned in some outlets as alt-right white nationalism, in truth it’s not too different to the speeches given by Obama, Bush and previous US presidents. Rather Trump’s has a less nuanced and a more simplistic portrayal of the world and the US’s place within it. Trump’s states in this speech (my emphasis added):

Our soldiers still serve together today in Afghanistan and Iraq, combatting the enemies of all civilization.

You invade, decimate and destroy Iraq and Afghanistan, killing over a million people, put the region into violent turmoil but frame it as you are there combating the enemies of civilization? The brass balls and effrontery of that statement is worthy of a whole article. He goes on to say:

And so I am here today not just to visit an old ally, but to hold it up as an example for others who seek freedom and who wish to summon the courage and the will to defend our civilization.

But today we’re in the West, and we have to say there are dire threats to our security and to our way of life. You see what’s happening out there. They are threats. We will confront them. We will win. But they are threats.

Here Trump juxtaposes the imagery of civilisation against its threats. Doing so, he assumes that we in the west are the “civilised” and us civilised folk are under dire threat from threats that we must confront, combat, defeat and win. So what are the threats against civilization? Impeding sea level rises? Global poverty and inequality? Pandemics? No, it appears it’s time to wheel out the convenient villain of today, “radical Islamic terrorism” (as if there is a non-terrorism branch of radical Islam) He states.

We are fighting hard against radical Islamic terrorism, and we will prevail. We cannot accept those who reject our values and who use hatred to justify violence against the innocent.

In mentioning “values”, there is an overlay with the article I wrote the other day about Chris Uhlmann’s criticism of Trump being a “threat to western values”. What Trump and Uhlmann agree on is that western values are an actual thing. So what are western values? When you go through this speech and others given by western heads of state, supposed western values appear to be tolerance, democracy, freedom, liberty, secularism. (It’s also important not to forget all those values like democracy, equal rights, workers’ rights, etc. were fought for against the prevailing powers of the time.) To Trump, the height of the thing we value most is as follows:

And above all, we value the dignity of every human life, protect the rights of every person, and share the hope of every soul to live in freedom. That is who we are. Those are the priceless ties that bind us together as nations, as allies, and as a civilization.

So according to Trump this is what our civilization values most: the dignity of every human life. Yet when we examine the rhetoric of this speech or Obama’s, there appears to be a huge chasm between what we are told we value and what in fact our Government actually values. For values to have any real meaning they have to be adhered to. If I value “honesty” except when it inconveniences me or means I may lose out, then I can’t truthfully say I value it, as what I truly value is getting my own way. 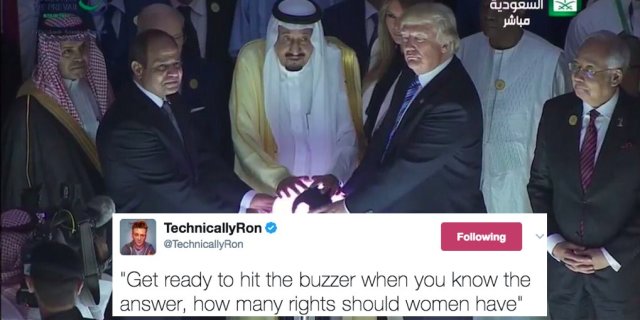 If Trump claims we value democracy and freedom but only for some people and not for others, is that something that we can honestly say we value? We see the hypocrisy and fallacy of “western values” in the west’s relationship with Saudi Arabia. Here is a tyrannical monarchy that appears to be the antithesis of everything we supposedly value in the west. Extreme intolerance to the expression of religious freedom, sexual orientation, women’s rights, freedom of speech, etc. It’s a violent and oppressive regime in every aspect of its rule. Yet weeks earlier Trump stood in some creepy ceremony, around some weird orb with the Saudi Monarch and Egypt’s own brutal dictator President Abdel Fattah el-Sisi in order to secure billions in arms sales. Values, what values? If North Korea or Cuba was bombing and murdering thousands of innocent civilians of a neighbouring country, as Saudi Arabia is doing to Yemen, the G20 leaders would be at up in arms, crying “the dignity of every human life”, but Saudi Arabia gets a pass. In this same speech Trump even has the nerve to mention Saudi Arabia in the fight against radical Islam.

So what we see is western values matter, until they don’t. They matter until they lose us money, access or control, both economic or militarily. The example of Saudi Arabia is just one of many. So our political and corporate class in reality value profit and power for their personal enrichment, at any cost. Yet saying that in a speech doesn’t quite stir the crowds in the same way.

So in reality most people do hold certain values to be important, be it fairness, love, compassion, tolerance and so forth. Yet they are human values, they are not something particular to the west. It’s here we see the twisted irony and Orwellian nature of speeches like these. How the cause of a problem presents itself as the solution. It’s the leaders of the G20 and the centres of corporate and political power they represent that are the threat to “human” civilization. We are under attack, but not from Islamic terrorism but as global warming become unstoppable, we are under dire threat as we are being propelled into a human species extinction event. That’s just the threat at the top of the list, as there are many more we face, not as threats “to” our system but threats “from” the systems themselves.

Most ordinary people, be it Syrian’s, Australian’s or Columbian’s, share common values and it is Trump’s values which are abhorrent and divergent from the norm. Hopefully the vapidness of speeches like these is becoming more apparent and people are starting to be rightfully more cynical of what our loony, lying leaders end up saying.

Civilisation does in fact need defending, but not from radical Islam, but from the likes of Trump and his G20 cohorts.