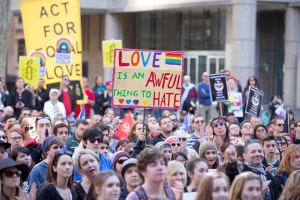 Ok, I know I’m a bit of a rant-aholic. After seeing all the posts on the possible Australian plebiscite on gay marriage, I thought I would just sit this one out and be content addressing many of the other gall-inducing issues I can write about. Yet I came across a comment on Facebook that really got on my goat and compelled to me yell out, “Rant power… ACTIVATE!!!” so here we are! I think that the comment (which you will see below) summarises the banality and thoughtlessness that most of the opposition to gay marriage rights seems to be about.

Let’s have a plebis what?

I will be honest: “plebiscite” was a word I had to look up, as initially I thought it might have something to do with roundup weed killer or something about poor people, but it appears to be fancy term for a type of non-binding referendum. (Come on, I can’t be the only person who didn’t know what it meant.) It’s like a national version of the principal asking at an assembly, “Hands up, kids. Who thinks no more homework for the rest of the year is a good idea?” 95% put their hands up, to which the principal shouts, “Wrong answer!! Well, who cares what you think anyway,” as he storms out. As it has already been mentioned elsewhere, the government didn’t need to have a plebiscite to spend 24 billion on some overpriced and useless F-35 fighter jets and the very fact they have called it a plebiscite just points to how moronic, tone deaf and out of touch our government really is — like we needed further proof.

The argument I see against gay couples having marriage equality is presented as the “slippery slope”. It’s a grade-A chestnut that gets wheeled out time and time again to somehow justify or explain opposition to anything that remotely reflects social and cultural shifts. It’s perfectly summed up in the screenshot of this thread on Facebook below where “Mr Vote No” articulates his fears about the slippery slope of marriage equality for gays.

Now my friend at the end gave a very astute and insightful reply, which of course didn’t get answered. Yet at heart what “Mr No Gay Marriage Equality Rights” is saying is, “Where will it all end?” It’s when he asks, “What’s next, animals, kids?” the argument doesn’t just get stupid, it gets insulting. The implication is that a man marrying a man, or a woman marrying a woman, is one step away from a person marrying their favourite variety of livestock. As if same sex marriage is akin to inter-species marriage. It’s called false equivalence, pairing two completely different things and trying to make them the same. Then he makes it clear it’s not the “gays” he is worried about (like that should be somehow reassuring) rather another minority he thinks this will empower — surprise surprise, it’s the scary “Muslims”. One assumes he’s not the guy to invite to your gay brother’s marriage to a Muslim man. Truth is, his argument of “What’s next, animals?” is no less bigoted and insulting than arguing if a white woman marries a black man, what’s next? White women marrying gorillas? I’m sure versions of that logic were made at the time when interracial marriage was against the law.

What is worthy of concern?

Yet in reality, slippery slopes do exist. Indefinite detention without trial, which started with “enemy combatants” being denied habeas corpus and then being dumped in Guantanamo Bay, has now transformed into legislation that allow the US government to detain US citizens indefinitely without trial, in the US or anywhere in the world. That’s a slippery slope. Permitting warrantless wiretaps, unchecked surveillance, GPS chipping criminals to keep the public safe, backdoor privatisation of public services, etc. — these are actual slippery slopes that potentially endanger the general public at large. Yet equal marriage rights for gay men and women is not one of them. It’s simply about Australian law catching up with Australian values and culture as they stand in 2017 rather than 1950 — and let’s not forget the rest of the Western world!! As my friend pointed out in her reply, many new legal rights, be it women’s right to vote or the right to not be the property of another, were met with the same consternation and fear at the time. People who hark back to the “good old days” conveniently forget that for many those weren’t “the good old days”, rather they were times when anyone who didn’t fit with the privileged social group struggled and fought a constant uphill battle for basic respect and dignity.

There are a lot of messed up things in the world right now and there are many parts of life and society I think have gone backwards. Yet one area that has come a long way (even if there is still a lot of work to be done) is our social acceptance for minorities, be it the LGBT community, ethnic minorities, people with disabilities, etc. The fact that by and large most people support marriage equality for gay men and women is some sign of our evolution and progress. And I also really wonder if Australia wasn’t so statured in the noxious bile of the Murdoch press whether that would be even more the case.

So it is easy and tempting to pour scorn on some of the arguments against marriage equality but I think it’s better to try assuage their fears. At heart, people who are against this are just afraid: afraid of change, and afraid of their sense of security and stability in life being shaken. Yet in time I think that like most of things, when the sky doesn’t fall down, no one self-combusts into a gay rainbow, and a plebiscite isn’t called for a vote on “ferret and man marriage” then they can relax and just be happy for other people’s happiness.