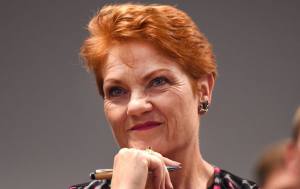 You’ve got to give it to the One Nation Senator Pauline Hanson regarding her ability to create comedy/offensive gold. Her most recent venture into confirming her imbecilic qualities came as she dressed in full burka in the senate, and then dramatically unveiled herself as a way of bringing attention to her attempts to get the burka banned. I would have been surprised if there weren’t cries for her to put it back on to at least cover that uncomfortable smirk she has that half looks like she is sucking on a lemon and half like she’s feeling the discomfort of some oversized haemorrhoids.

Although there is no evidence whatsoever that wearing a burka is in any way connected to acts of terrorism, facts and truth don’t get in the way of “good” bad ideas. After George Brandis gave his scathing put-down of her attention seeking antics, I was amazed she didn’t stand and up and ask, “Please explain?” (For those of you don’t remember, “Please explain?” was Pauline Hanson’s answer when asked if she was xenophobic. She must have thought it had something to do with allergies.) I am sure that all Pauline Hanson’s mind registered was George Brandis saying the words “burka”, “Muslim”, and “terrorism”.

Yet the real take away question is, how did someone so bigoted and stupid become an Australian senator? The answer to that lies in Australia’s toxic Murdoch press and an intellectually lazy public. Australia’s public are happy to buy into the faux issues of “Muslims taking over” while behind the backdoor healthcare is privatised, a corrupt fossil fuel industry remains unaccountable and indigenous Australians keep getting and worse and worse of a deal.