My bewildering sojourn into Australia’s online community of patriots and racists.

My bewildering sojourn into Australia’s online community of patriots and racists.

I have recently written quite a few articles analysing the racist and ignorant dealings of the Australian Senator Jacqui Lambie. She seems to be an updated Pauline Hanson although unlike Pauline having Twitter to express the rash and shaky ideas that pop into her head.

In response to being the lead voice in the “Ban the Burqa” campaign, I wrote an article under the pretence of being Jacqui Lambie giving the top 11 ways to spot a terrorist dressed as a clown. The absurdity of that notion – ”Ban clown faces”-  just highlights how crazy and ridiculous these ideas actually are. Then I had the idea of creating an obviously fictitious Jacqui Lambie Facebook page, to carry on this act of writing preposterous and absurd policies and beliefs.

I embarked upon setting up the Facebook page, entitling it “Hypothetical Jacqui Lambie,” doing my best to mirror her own profile page in an attempt to make it appear genuine apart from the word “Hypothetical” in front of her name. I thought that possibly it would receive a few ‘likes’ from others who were shocked and astounded by her craziness; basically people just like myself. Yet mostly I actually assumed nobody would see it and it would eventually disappear into a cyberspace graveyard.  I had made no attempt to appear as the real Jacqui Lambie as everything I posted was obviously far fetched and farcical. Well, it was obvious to me it at least.

However, before I knew it I had over 200 ‘Facebook friends’ sharing their support of the hypothetical Jacqui Lambie with me. At first I wasn’t sure how to take it? Were they playing along with the joke by pretending it really was Jacqui Lambie? Were they being ironic and encouraging these crazy ideas? Or had they for whatever reason not understood that this was a Facebook posting aiming to satirise the person rather than actually being her? Or did they realise it was a joke but didn’t give a shit and posted their thoughts regardless?  I am sure many people did understood it be a joke as some of their responses were quite hostile. Yet disturbingly for mankind’s intelligence, there were definitely others that didn’t as many genuinely seemed to think that the things hypothetical Jacqui was posting were real thoughts and sentiments.

Here is an example of some of things I posted to try make it clear it was a humorous take on Jacqui Lambie. You can click here to see the Facebook screen shots of all these posts.

Although in my mind there was never an attempt to trick people into thinking it was real, some people failed to understand it. That in itself was quite funny. Yet what happened over the following days went from amusing to disturbing. Like most people both online and offline I associate with people who share in the things which they value and care about. I have a few friends on the right, but they are still good-hearted and sincere people, so therefore generally speaking I am not exposed to racist and hateful comments or opinion. Yet on my new satirical site people started sharing their open and very public hatred and loathing of Muslims in Australia. The tone of the posts were really angry and hostile. It seemed these people were really scared and angry about the fact that Muslims were living in Australia. Recent events, which had been blown out of all proportion by the Abbott government, were stoking the flames of this hatred even further. The following screen shot of posts summarises the general tone of the comments posted. 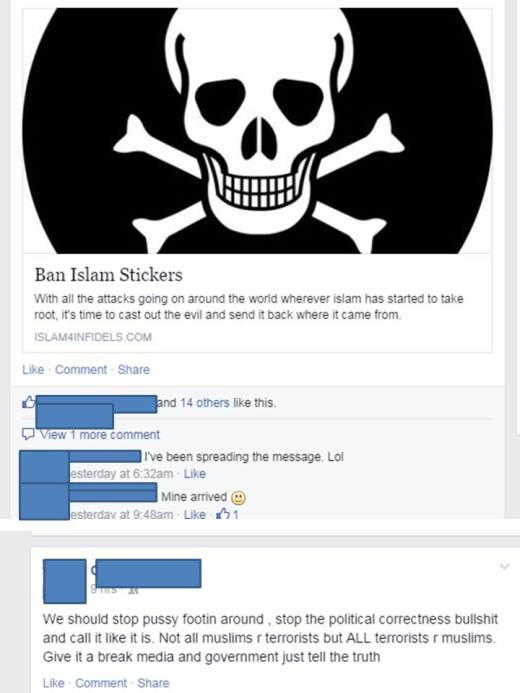 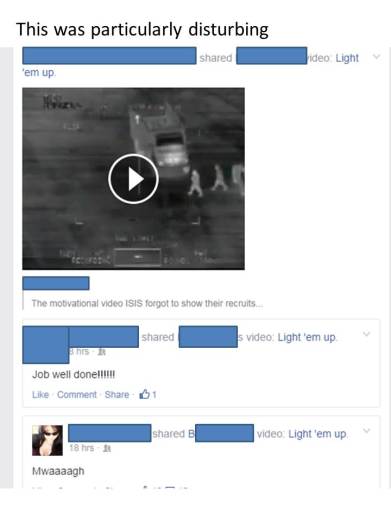 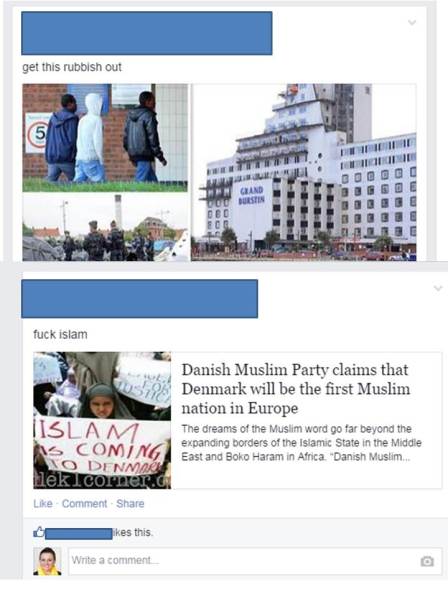 There was one above of US combat mission, similar the collated murder one Wiki Leaks posted of a number of men being shot down. Actually not shot down, more totally eviscerated. It seemed whichever missile they used was so powerful it must have blown them to pieces. At the end of the video there is one guy who you can see crawling out of the truck, obviously wounded and they then open fire again finishing the task. Who these guys were I have no idea but it was genuinely horrifying watch this X-box style of murdering people. They have neither trial no jury, no habeas corpus, only US justice “hellfire- style.” The comment below it made it even more sickening. These seemed to be taking pride in the elation of watching other fellow humans being destroyed.

That video and the comments following it captured the tone of much of what was posted. I didn’t realise just how vile and hateful the sentiment had become against Muslims in Australia. I fail to see with these attitudes prevalent in the community that there won’t be an attack and hate crime carried out on innocent Muslims. The aggression and hostility which seemed to be being whipped up into a frenzy online, you would think it would be only a matter of time before that would be translated into some horrific real life act. The narrative they are living in is they are “Under attack.” Their culture, their way of life is being threatened by the “Scary Muslims” and they have an online community of people who all echo and amplify their hatred.

Yet I would have to put some of this on the door of the current Abbott government. As they can’t pick and choose when it does or doesn’t suit them for the public to get behind the war on Islam. In order to gain public support for a new war and increase control and power with their new anti-terror laws, they have had to exaggerate and terrify the public. They are quite happy for people to think that ISIS could be living next door and getting ready to behead them. Therefore this is why we need these new laws and why we have to go and bomb people twelve thousand kilometres away. At the same time officials say all Muslims are not extremist, so don’t go taking it out on them, but also remember that ISIS will seem to be normal Muslims but secretly they are terrorists and the only way you would know the difference is when your head is being cut off. Of course all Muslims are not extremist, so don’t go taking it out on them. They know exactly what they are doing, so in cahoots with the dominant Murdoch press public opinions are being directed and manipulated to suit their broader and economic interest. The end result of the harm coming to the Muslim community in Australia will just be clocked up to unfortunate collateral damage.

So it’s difficult to know how to respond to this current mind-set in Australia. I would love to say that it’s only a small minority of the public, yet given the support the Abbott government has it seems they have tapped into a great fear within the public which they are clearly aiming to exploit. It seems at least many Australians share these fears and are angry toward “Muslims.” Like the fear of asylum seekers the vitriol contains no sense of empathy. There seems to be no broad understanding that generally speaking, people become terrorists or fundamentalist in response to extreme things that have happened to them. ISIS didn’t emerge out of thin air, rather as a result of the blow back of the West’s constant meddling and bombing the Middle East. Your everyday Australian Muslim is no different to your average Australian Christian or Australian atheist. Most Australians have more in common with the Muslim family living next door who have just arrived from Syria then they do the rich pricks who are running this country.

I felt shocked at the hatred I was reading. I felt both sad and angry. How do people end up so fucking ignorant and uncaring? What is their problem? How much is it just them being racist and how much of it is stirred up by the government and press? Are they as much victims to the environment as the Muslims they seek to persecute? To be honest, I don’t know.

A while back I wrote an article saying that we should have compassion for the racist who is against asylum seekers as in my heart of heart I do feel this is the right and appropriate response to hatred. My hatred of their hatred will just end up as part of the problem and this cycle has to break somewhere with someone. Yet coming up against the comments I was reading on Facebook I didn’t feel compassion. I just felt a revulsion and disgust at what people had descended into. I feel an anger like “Who the fuck do these people think they are?” I felt ashamed that some of my follow Australians had more in common with the Klu Klux clan in Kentucky than they did with me.

At same time it reminded me of how the voice of sanity and reason needs to be heard. It revealed that those who are opposed to this crazy racism against the Muslim community need to stand up and speak louder than the bigots. We can’t allow the Mexican wave of fear and hostility to sweep across our country. So I have closed the fictitious Facebook profile down and the smile has certainly been wiped off my face. I have concluded that it is true Australia is under attack, not by Muslims, but by fear and ignorance which is being stoked by greed and opportunism. This is the enemy. It’s this we should be standing arm in arm against. It is this threat we need to unite against, defending what is right and stand up for what is loving and true.

2 thoughts on “My bewildering sojourn into Australia’s online community of patriots and racists.”