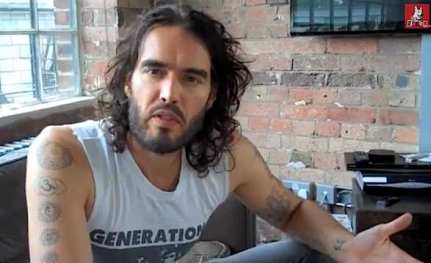 I have been following Russell Brand for some time now. A few years ago, I read his book about his struggle with addiction titled “My Booky Wook.”  As someone who has dealt with their fair share of addictions struggles, I found it was a very personable, honest and insightful book. In the book, Brand demonstrated an honesty as well as vulnerability that isn’t too common in the public sphere. The fact that he has been able to remain sober and able to pen a such a relatable book, just for that alone I had some admiration for him. Since making his “comeback” so to speak, I have watched how the spiritualty he seemed to uncover in his recovery, has broadened to include a more critical view of mainstream media as well as our current social and political structures. That coupled with a witty, cheeky and flamboyant personality, his “celebrity” has allowed him a platform to share some conventionally speaking “radical” ideas. None of these ideas are original as such, which Brand would acknowledge, rather in mainstream media they just don’t get discussed. There is a very clear and demarcated line of acceptable debate that various established journalist, politicians and commentators discuss within. What I’ll be interested in knowing is how long within the mainstream media will Brand be allowed to continue to speak of “that which is not to be spoken”. Maybe we could call it the Voldemort factor.

What is most revealing is outlets, like the Guardian/Independent that are in theory the progressive voices, are the nastiest at policing who is and who isn’t allowed to debate what subjects. As we saw this with Julian Assange as he fell out of favour. Over time you witnessed the gradual progression of snarky belittling, all the way to the point that he seems to no longer exist. Julian Assange has been reviled into irrelevance. These Guardian journalists remind me of the “cool kids” at school who turn on the kid who was once cool but is no longer cool. This happens because it turns out he isn’t really one of them. This often entails going after the person’s supposed character defects, rather than the arguments or politics. You see this same thing happening with George Galloway as he is on the receiving end of the same caustic scorn. In Noam Chomsky and Edward Herman’s classic book on media “Manufacturing Consent” , this process is called Flak. It is one of the five filters which ensure the media stays within parameters that the prevailing state and cooperate power allow.

We see the processing happening almost to the letter constantly throughout the media. Now, Russell Brand is promoting his book, we can see the flak in action as various “commentators” start the process of belittling and undermining the person themselves, as opposed to the actual ideas put forward.

Piers Morgan recently wrote what I would consider a very condescending piece. Piers reminds me of a history teacher with an overinflated opinion of their towering intellect who thinks they are a bit of radical but is actually very conservative. This history teacher thinks his pupils’ idea of a “better world” is admirable but they are in fantasy land, unlike him, they are not grounded in the real world. When in reality the history teacher can’t understand the ideas of the pupils because he can’t see that he himself is part of the very problem they want to overcome. The history teacher can’t comment on the problem, as he is the problem. So we see an authoritative voice of Piers taking Brand down a peg or two, making it clear he is not part of the club, therefore whatever he says has to be dismissed outright with remarks like this

“I like Brand personally and enjoy his splendidly linguistic comedic romps on the airwaves as much as anyone. For someone with little formal education, he’s incredibly bright and funny. But this whole ‘revolution’ he’s trying to wage is a load of old sanctimonious hog-wash.”

How patronising can it get, as he writes “For someone with little formal education” it’s hard not to read that and think “Go fuck yourself Piers”. When did having a formal education have anything to do with making accurate observations about the problems in our society? In fact a formal education may inhibit the ability to see, as you have spent longer in the brainwashing mill of state approved schooling. Then he points out…

“But this whole ‘revolution’ he’s trying to wage is a load of old sanctimonious hog-wash.”

Piers doesn’t really explain why it’s hogwash or what parts of the argument make it hog wash, rather it is just a blanket of dismissal of the “whole” thing.  Does Piers have any other ideas or alternatives of how to fix our broken society? Probably not because in his position and outlook society isn’t broken, the system is OK because it evaluates him to the top of societies’ best bullshit-artists. So he has no desire for radical change. Then he writes

Brand wants us to believe he’s now trapped in the vice-like grip of a tormented celebrity-loathing freedom fighter … Like most great revolutionaries, he’s quite happy wallowing in his own hypocrisy.”

Again no mention of his arguments or what exactly he is proposing. No explanation of what exactly makes, what Brand is saying, a hypocrite. According to Piers, Brand’s position of celebrity and privilege excludes him from having any real insights as to how to make society more fair and equitable. Yet based on the logic of that argument, Piers own privilege and celebrity status should dismiss him also from any authentic observation. The double standards are missed by Piers. Then the fact that his views and support by douche-bag extraordinaire Donald Trump you think would be serious worry but in fact it’s taken as fellow chums patting each other on the back.

This exercise in derision hasn’t been limited to Piers Morgan. Over the last few weeks, the Guardian has given a number of commentators a platform to belittle Brand. From comedian Stewart Lee, whose piece I actually had trouble working what exactly his point was, other than Brand is a person to mock rather than listen to. Unlike of course Stewart Lee himself. A response to the article in the comments section by GiulioSica aptly summed up the function of Stewarts article.

I understand what satire is, Lee is a master of it. But the object of satire is, in this case, someone who is asking us to look at our corrupt rulers and the reasons they remain above public accountability. And the only ones who consider Brand “sanctimonious” are the ones who prefer that these truths he highlights are ignored and that we meekly return to subservience. Brand is using his position to highlight inequality, and some are still preferring to focus on how he talks and how he dresses. That says an awful lot more about the motives of those people than you realise. The focus of Lee’s satire is horribly misplaced here.

Then former Sex Pistols front man John Lydon, who because he wrote a song about anarchy forty years ago (which he made a non-anarchistic fortune from), is somehow the authority to consult on who is or isn’t a real rebel. Listening to his response to Brand, I honestly don’t think he actually has read Brands book or really actually listen to what Brand is saying. We then have the bread and butter Guardian writers such as David Runciman and  Polly Toynbee who add their own two cents as to why Brand needn’t  be taken too seriously. Polly, who happens to “agree with John Lydon”, which says more about Rebel Rocker John Lydon than it does about Polly Toynbee. All these articles, although taking different angles, all come down to the same thing “Who are you to say anything?” or “How dare you say something”.

They are all bringing down Brand not because they are told to from “high above”, rather they have internalised the protocol and standards of debate and they just know instinctively when and who to condemn. As I wrote about a few months ago regarding an article by Deborah Orr about Denis Rodman’s visit to North Korea. There is a certain language of scorn that is only used for those who are considered by an unspoken agreement as “tainted.” She called Rodman “pathetic” and other put-downs that would never be used with respected politicians like Osborne and Cameron, who far exceed Rodman when it comes to being pathetic. 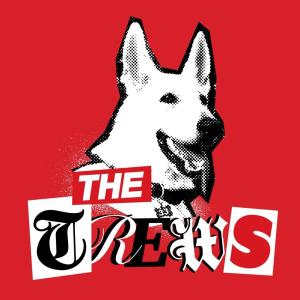 Now the fact that Brand has his own YouTube news analysis, it shows the “Trews” at least give him some voice outside of what the mainstream permits. Maybe this is part of a character attack, as he is playing outside their means of control. If Brand continues on the track he is on and goes deeper into anti status quo ideas, it’s hard to see him continuing to garner ancillary supported by vessels of the establishment such as the Guardian. Either they will turn on him or he will turn on them, which I hope it’s the latter.

Whatever the case I would like to think Brand’s voice is the start of something. We’re waking up to the way things are and it isn’t just something on the fringe. That a broader base of people see that change will come when we come together in a unified voice against the oppression and deceit that surrounds us. As a heart, it’s not Brand that is the threat, it’s the ideals he is propagating. He’s started stirring dissent, but it not the faux dissent of the Guardian but one that actually has the potential to be  real. I hope it continues and I hope it really gains some momentum. As we know for sure the mainstream media is only built to ensure the status-quo and we need intelligent and charismatic voices speaking of ideas outside of those boring and safe parameters. So I say Go Russell Go!!

94 thoughts on “The predictable belittling of Russell Brand begins.”